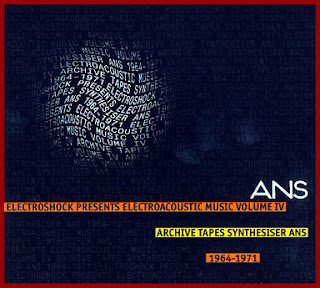 The Soviets did not only invest in sophisticated rocket technology & space stations...no, they also invented three incredibly unique synthesizers: (a) The Theremin (which has become pretty popular by now), (b) the Polivoks (sorry, don't know any recording of it, but it can perhaps be described as the Minimoog's wild brother) and (c) the ANS. You wouldn't recognise it as a synth even if you stood right in front of it. It looks like a baroque drawer/cupboard.

The ANS beast is probably one of the most unique synths ever made. Sound-synthesis is made with photosensitive sensors, and it sounds somewhat like a liquid cosmic nebular. Strange stuff. What's equally strange is that the ANS has attracted renowned classical composers like Alfred Schnittke & Sofia Gubaidulina. There's just a handful of known ANS recordings: Edward Artemiev's original Solaris & Stalker soundtracks (Solaris can be found here), Coil's three CD/one DVD set CoilANS, and Stanislav Kreichi's Anisana. For a better description check Wikipedia.

This recording featured here is probably the most essential, as (unlike the others) it is quite diverse in sound and includes some extremely rare electronic excursions by Schnittke & Gubaidulina. It's now impossible to get (even if you'd sell your mother's soul).
Sharebee #1
Sharebee #2

Excellent post! I've never heard of this series before, it's quite a treat! Thank you.

Oh wow! I just downloaded this and am presently listening to the first piece: it's unbelievable! I never heard of this stuff. Truly beautiful...

Thank you, thank you...very nice stuff. You have an excellent blog.

I also came across some more early synth ventures at this RCA Electronic Music Synthesizer page. Might make a good Orpheus post.
www.uv201.com/Misc_Pages/rca_synthesizer.htm

You're a genius, Dave!! This is a real treasure. I'll post it here soon. Thanks a million, this is REALLY great stuff.

damn u pretty deep in that synth stuff....got a few swiss and french things u prolly would dig....