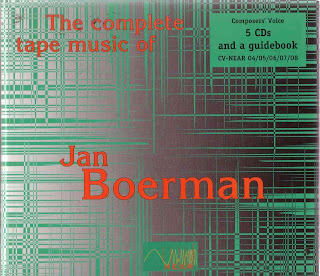 Besides Germany, France and to some extend Sweden, the Netherlands were probably the most active European country in the formation of electronic music (c.1950-80). The Dutch vintage electronic music scene comprises such notable names like Dick Raaijmakers, Ton Bruynèl, Tom Dissevelt (aka Kid Beltran) and the exiled trio Roland Kayn-Konrad Boehmer-Gottfried Michael Koenig (all three originally from Germany, but living in Holland for many years). Jan Boerman, whose complete electronic works we are featuring here today, is probably the most difficult one to find, as his 5CD box originally released on Donemus remains out of print/deleted.

NB: This upload took me a week at the nternet caffee and was a major invest of my time and money, and there won't be any other larger posts like this - especially given the unfortunate fact that, judged from the lack of comments to previous posts, I'm doing it for a bunch of "hit and run" freeriders who failed to understand the basic ideas of interactive web 2.0.

Wonderful. Thank you for this

I'm afraid you won't get famous and popular running an experimental music blog. Have you ever think of a Radiohead post? Keep on the good work, anyway!
http://continuo.wordpress.com/

A big thank you Adam, lest I be permanently assigned to aforementioned slacker status. Much joy as you are about the only one specifically dedicated to early "classic" electronic and synth. Filling a need (in light of the much loved scorebabyannex and technicolor dreamspot(?)), so glad you are still kicking it! btw, are you accepting submissions (vinyl rip) for ul?

i don't leave comments because i don't know what to say except :
Wow!Thanks!

I thank you very much for all of your efforts. I've found your blog some weeks ago and I'm trying to get into it. It's an amazing source of information. Please keep on.
(Electronic) greetings from Portugal.

Many thanks for the incredible time and effort put into this epic post. I haven't downloaded this yet, but I will this afternoon. There's no way I would get to hear all these wonderful electronic works without You, so your blog is greatly appreciated. Thanks a million...Wes

Many thanks from Italy!!!

Cheers m8, a great site with a shitload of brilliant music.

Just found your blog.
thanks for taking the time to upload these. Looking forward to having a listen

This is just what this fella needed today, thank you so very much for this. This is my first time here but I'm digging this one so much I'll just have to check out the rest of your blog as well.

This is one of the most "out" posts I've ever seen on the web, and well worth the time it took to DL it... I just hope you still think it was worth your while to upload it.

Again, thanks a bunch!

amazing site, as a musician of experimental tape music and the like this site has become a valuable resource for me to discover new "old" artists. Im amazed at the things you've pulled out i only wish i could contribute but you have all of it im sure, but ill look around perhaps post some of my stuff for you too

thank you very much!

This is an awesome post. Jan Boerman has been a fascination for me.

Sorry to make you think I'm a hit-and-run freeloader. My 'netiquette' is sadly lacking.
Thanks for doing what you do, really, it's been educational.

Thanks so much for making all this truely wonderful and ever so timeless music available.

Your blog is WONDERFUL!

You're performing a great public service by exposing quality music.

Your efforts are very much appreciated!