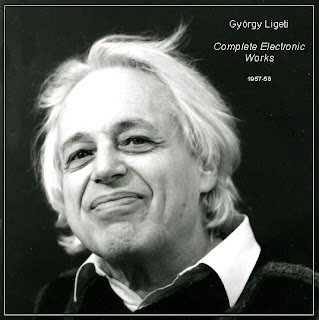 Although György Ligeti has composed less than 14 minutes of electronic music it is impossible to find his electronic oeuvre on a single release. Until now. This generic, self-made Orpheus Records compilation brings you both electronic miniatures that Ligeti composed during his stay at the Electronic Music Studio of the West German Radio (WDR) in 1957/58 - on invitation by Karlheinz Stockhausen. His third electronic piece, the mythical Pièce électronique no. 3 was composed/sketched in 1958 but could not been realized at that time - remember that the age of affordable and actually useful computers was still to come. Pièce électronique no. 3 was finally realized by the Institute of Sonology in Utrecht, the Netherlands in 1996. And voilà, here we have György Ligeti's complete anthology of electronic works. It's so easy. Just three tracks, 14 minutes. I felt that this was a bit short, so I added the quasi-electronic pieces Volumina for organ and Poème symphonique for 100 metronomes (sic!) from following years (1961/62) which transfer the quest for unconventional timbres and rhythms to non-electronic instruments. Please also find attached a high-resolution version of the graphic score of Artikulationen, one of Ligeti's electronic pieces. Try to read it while listening to the piece, it is useful.

Wow! thanks for this one, a real nice treat you have here. I remember reading about Ligeti making electronic music and looking all of over for them, without avail.. But i didn't even know that he only created 14 minutes!