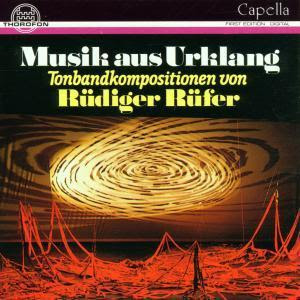 Rüdiger Rüfer, born 1933 in Berlin was sound engineer at the Electronic Studio of the Technische Universtität Berlin (where he assisted e.g. Boris Blacher) and later (from 1974) professor for electroacoustic Media at the Hochschule für Musik und Theater Hannover (Germany). This largely unknown CD compiles some of his tape pieces composed between 1971 and 1985, and probably the only electronic music available from the Electronic Music Studio in Hannover. Complete liner notes (in German) included.

track 3 is corrupt, it seems. would it be possible for a re-upload? This is a fascinating post BTW. you're doing great work!

thanks for pointing me to this goof. Please rename the second part [Rufer2.part2] to Rufer1.part2 - then everything should unpack correctely (incl track 3, which plays fine). Let me know if this doesn't work. There's another typo: Sequenzgestalten was made 1983-85, not 1983-95...